Is Himalayan Salt Bad For You? 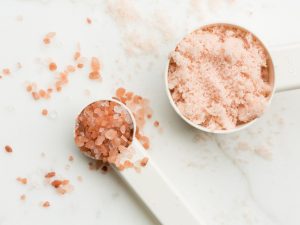 This is quite a simple question to answer: Common salt, or sodium chloride, is the chemical compound NaCl. Salt is a natural product and can be found in many parts of the world in forms. Salt is available on the surface of the earth and under it as well as in the seas. It may interest you to know that salt can also be found on Mars and sometimes salt meteorites hit the earth from outer space. Salt is very important to us and has been for centuries. This can be borne out by the very nature of the word that comes from the Latin sal, meaning salt. Our English word ‘salary’, is tired up to the fact salt was once a currency, meaning people were paid for goods or services in salt, for instance, Roman soldiers were partly paid with salt.

Salt is needed to maintain and perform several essential functions. For instance, salt is a vital part of the system that maintains blood cells fluid and is also used to send important information to the muscles and nerves. Salt can be found hard at work within our small intestines, taking up nutrients as our food is being digested. One very important factor about salt and that is that our bodies cannot make salt by its self, meaning that we need salt intake, although our bodies do routinely standardize how much salt there is present at any one time. For instance, if you have too much salt you will feel very thirsty and feel the need to drink lots of water. Doing this speeds up the eradication of salt through the kidneys.

Is all salt the same?

Let’s face it, most of us use too much salt, after all, chips are not the same without salt. And we knew that too much salt, amongst other things, will increase the risk of heart disease dramatically. It is quite clear, cut down on the amount of sodium chloride you eat. There are, as well, other considerations and that is that not all salt is the same. There is the white stuff that sits on everybody’s table, but that not the whole story. There are many different sources of the white stuff and it is that that dictates the fact as to whether salt is good for you or not. Below we explore some of the different varieties of salts now available on our shop shelves to see which is best white himalayan.

Most of us go down to corner shop and buy sodium chloride (common “white stuff”) and think no more of it What we do not realize is that the “white stuff” is refined (much like sugar) and it is this that can give us health risk, kidney stones being one of them. In the main, salt comes from the sea. where it may have been laid down millions of years ago in brine deposits. Now your common salt from the corner shop is taken from its natural sources. and heated up to 1200 F, and in doing so, most of the natural elements are removed. So your common salt ends up being chemical sodium chloride, whereas natural salt has up to 84 natural minerals in it.

ADVERTISEMENT
No Result
View All Result